It’s July 9th, and it was a hot one. We arrived home to find the guys gone. I’m always disappointed not to see them when I get home. But it was very hot and they probably just tired. None the less, I missed seeing their bright smiling faces! 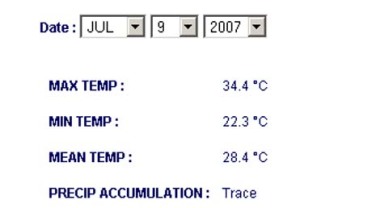 The drywall is taped and the space looks amazing (I might have said that before, once or twice). Anthony the electrician was in at 8am; he is now putting in the actual lights and plugs and switches. Todd is really making the deadline happen! 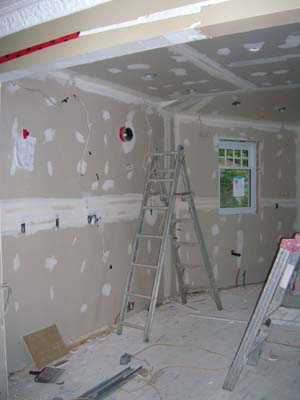 This is the powder room. The corner is left open so that the plumber can fix the piping (this is the one that was plumbed too high for the tea cup cabinet to sit nicely, then when he came back, he plumbed it so that the drywall could not sit flat). This time, Todd wants to watch the guy do it to make sure he does it right. 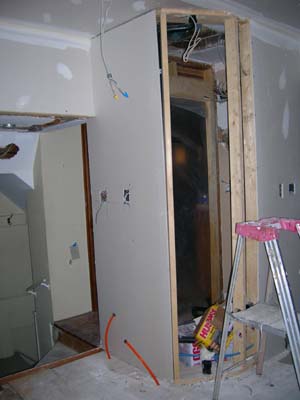 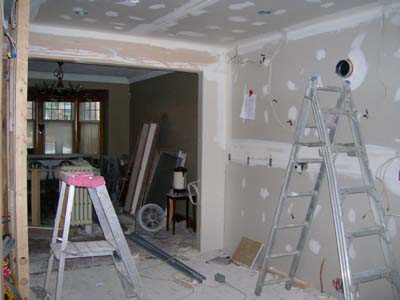 We met with George again. Yes another dispute. I was in this meeting, believe it or not, I didn’t swear once! not once! I am still really annoyed about the electrical box. He claims he didn’t include it in our contract because he didn’t think we needed it. Yet, during our initial meetings, we went downstairs and looked in the box and he even commented that it was full. Now my question is…how on earth did he expect to electrify the addition IF THE BOX WAS ALREADY FULL?????? UGH. The other really aggravating thing is that no one can tell us if we HAVE to move the meter outside (this is expensive). I’ve even spoken to the ESA (Electrical Safety Authority) and the useless operator refers me to the useless website..UGH! We’ll get through it. The other bugger is that our kitchen is still waiting on staining. Why you might ask? Hasn’t it been ready for 1 week now? Well, it seems that Fadil is waiting on another installment. Guess from whom! UGH. Damn. Crap. He is supposedly going to pay this morning. UGH. Update July 10- cheque was delivered and kitchen was sent out for staining. YIPEEEEEE!

Windows are expected at the end of next week. This time I did extremely detailed drawings in Illustrator and gave them to George. Hopefully (and we can only hope at this point), the windows will be correct round 2. This wasn’t George’s fault, but the manufacturer’s. Artistic license I guess.